The natural family planning methods such as basal body temperature and Billings method, are highly used in the world, and is based on the recognition of the signs experienced by the woman during the menstrual cycle. Learning to recognize these changes and feelings, you will know at what stage of your menstrual cycle you are. Know about methods of contraception natural.

The Billings method is based on the observation of cervical mucus. This, through its appearance and the sensation it produces, it is able to warn you if the woman is in the fertile period of your cycle or not.

This type of family planning is used by women who want to become pregnant as those who are looking for a method of birth control natural. When the mucus indicates fertility, couples looking to procreate may have relations in that period, even helps in cases where the woman has difficulty getting pregnant.

To be sure of the reliability of the Billings ovulation method it is necessary to commit to record several cycles, it remains important that the registration of the characteristics of the cervical mucus is daily, the success of the method is related to the knowledge of the fertile period, and according to having or not having relationships.

How does it work?

For the operation of the Billings method it is necessary to observe the vaginal mucus, take a little of this mucus from your vagina between your fingers and spread them apart so that you'll be able to see how this mucus is flexible and can be stretched a few centimeters as a string without breaking. The consistency will be similar to the raw egg at its optimal state.

It is always important not to confuse the day of increased secretion of mucus is the most fertile day, since what matters are the characteristics of it. On the other hand, the menstrual period is unique to each woman, so that is first priority to know know the body. 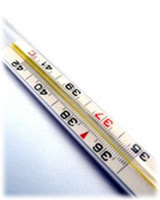 Keep in mind that the basal body temperature is especially sensitive, and it is necessary to have slept for at least three hours in a row so that the result of the measurement is correct. Also, try to always use the same thermometer, so you can be sure that there are no variations in the measure.

Once you get the temperature you need to register it in a table, and when the cycle is finished you will see the chart that way.

Read also: Plan your pregnancy with these 6 tips that will help you to procreate effectively